Professional architect Vladislav Surin made a thorough research of the town of GTA Vice City and found many serious flaws of the in-game map. He made a conclusion that the city was build in a hurry. For example, in Vice City there are no straight streets, a lot of big empty spaces, dead-ends and sharp turns. Such approach in a real city would cause a traffic collapse. Also, he pointed out that the game often uses the same textures. He found several identical hotels near the beach. Also there are problems with buildings, they often don't have a first floor. However, he thinks that the developers tried to fix the architectural and urban planning mistakes in GTA Vice City Stories with necessary details.

Architect pointed out that Vice City is an example of a town in the style of art deco, a movement that appeared in French architecture in the 1920s and became popular in the 1930s and 1940s in the United States. Art Deco is a combination of modernism and neoclassicism, combined with oriental, African and other exotic motives. 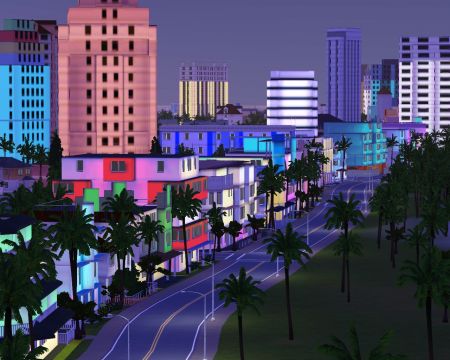 He also thought that proportions of the city aren't right. First area of is a condensed copy of the real Miami Beach, which is an independent land in the state of Florida. However, in the game the developers made a beach a lot bigger and it became an empty desert. The second city is Miami. In real life, this is a large town, but developers took only a couple of districts and an airport.

In his next video, the architect showed how he can improve Vice City. He created a model of the city, where he tried to improve its infrastructure. He placed new restaurants, cafes and a pier on the beach, removed unnecessary houses and added more roads for cars and bicycles. Also, the author tried to get rid of empty spaces. The project of the new city turned out to be so good that developers and modders should take a look at it.

Shoveled the Internet in search of anime skins at GTA VC and did not find anything suitable. Therefore, I decided to do the conversion myself. Can someone come in handy. Pack of nyashnyh skins from GTA SA for GTA VC. Characters: Elegant Party Mi...
Comments:: 7 Download (24.43 Mb)

10th Anniversary pack 1.0 was liked by many, and for this I decided to make a new version. It fixed the errors of the powdered part, as well as added new content. List of new features: 1) Animations In the previous version only animations of cu...
Comments:: 26 Download (229.00 Mb)