GTA Online inflation may lead to huge success of GTA 6

Starting mid-2018, prices of in-game items in have raised significantly. For example, when The Doomsday Heist update was released, RCV was added to Warstock Cache & Carry website. The RCV’s full price is $3.125.500, while Buzzard Attack Chopper that was added in 2013 is worth $1.750.000.

Reddit users figured out a whole , according to which multiplayer inflation is based on Rockstar Games’ plans to make the new entry in the franchise more financially beneficial compared to its predecessor. 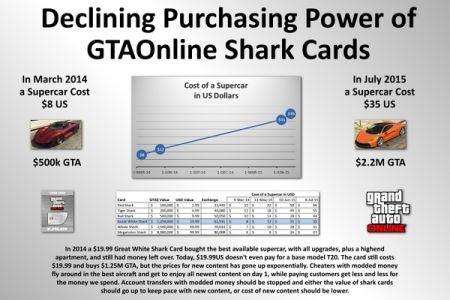 Reddit user James_Torelli said: “Boatloads of money are being given away to any player who logs into the game each week”. He is referring to the event announced by Rockstar Games a few days ago: any player can claim $500.000 to their Maze Bank account if they log into the game this week. Such events actually became much more frequent lately.

What do you think about this? What's the reason behind the inflation in GTA Online? Can price changes for GTA Online items eventually lead to being more successful? Let us know in the comments!