14 April 2020
Downloads: 105
Author*: Jeff Mathews
File uploaded by: Storozh
This program will allow you to edit the textures of cities in GTA 1. If you are a fan of the classics and want to experiment with the graphics of the first game in the series, then this is what you need.

It was created by American Jeff Matthews. the very first version of his program was released in 1997 and DMA design (in the future Rockstar Games) themselves recognized this program and praised the developer of this utility:
"Continue in the same spirit. Your editor is way more advanced than anything we had when we were actually developing GTA!"
- DMA Design

Description:
This archive contains the last two versions of the program: v3.1.0s, released in 1998, and v3.2.3, released in 1999. Version 3.1.0s is already unpacked and does not need to be installed, it only needs to be extracted from the archive and used. Each time you turn on GTAcars 3.1.0s, a welcome window will pop up. To make it disappear, press enter and use it. Version 3.2.3 is in the form of an ".exe" installer and serves as a patch to v3.1.0s. Simply put, send the unpacking to the GTAcars3.1.0s directory. However, you can quite safely use the older version, which is very convenient. Read the txt files I added to the standard Readme.txt.

System Requirements:
It will even run on a dinosaur, and more specifically, starting from windows95 and higher.

Note:
Version 3.2.3 is not paid, and was created exclusively on donations from users in the late 90s.
Both versions are free, but the author designated version 3.1.0s as trial. And he offered to freely download version 3.2.3 for free. Donations were optional. But now it makes no sense to donate, because. it all ended in 1999.

The program is a bit late for 20 years, but nevertheless, it should be on a site that is dedicated to all parts of GTA. Moreover, for fans of the classics it will be very useful. 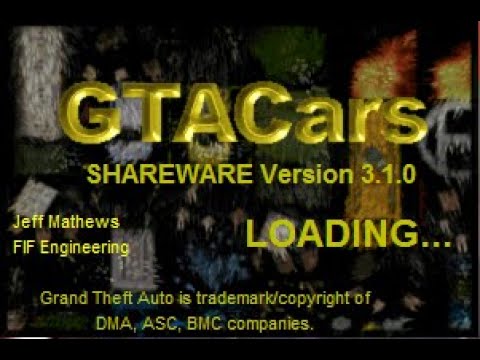